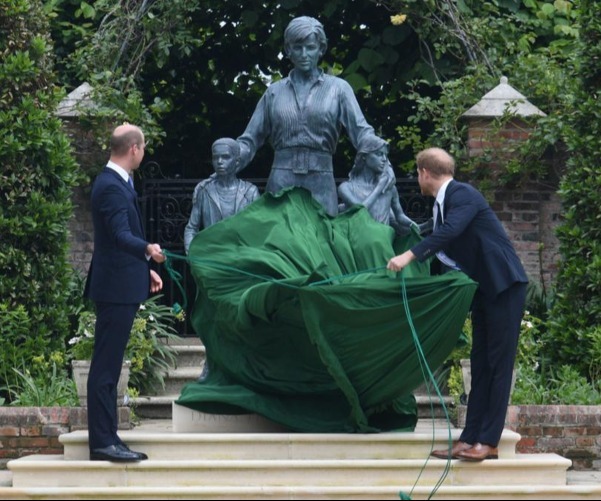 The reunion of The Dukes of Cambridge and Sussex was a surprise as they came together to unveil Princess Diana’s statue. Since the funeral of Prince Philip in April, this was the first time they came together on their mother’s sixtieth birthday. The ceremony took place in Kensington Palace.

Here is what you need to know about the unveiling.

A United Front By Prince William And Harry

All of us know the tensions between William and Harry as they are on different paths of their lives. However, during the unveiling, they put up a united front and unveiled the statue of their late mother. The Dukes may not share anything else right now, but they do share a love for their mother and a vision of how they remember her.

The event was low-key, and those in attendance included the brothers, the sculptor, the garden designer, and the people involved in creating the statue. The brothers also requested that the unveiling will not be broadcast live. Instead, they allowed a handful of media people to capture images and release the footage once the unveiling was over.

A Mixed Bag Of Emotions

A witness of the event described it as being emotional and informal. It was just an intimate family gathering which was done to pay tribute to the person Harry and William loved the most. It was not an ordinary day for anyone involved as they were all a part of something intimate and powerful.

Many people were standing outside the Kensington Palace and trying to catch a glimpse of the unveiling. Despite that, there was a sense of calmness in the air as everyone knew how vital this unveiling was. Once the event was over in the afternoon, then the footage and images were released.

Where Is The Statue Placed?

The statue of Princess Diana is in the Sunken Garden. It was the favorite place of Diana when she spent her time at Kensington Palace. It is close to the statue of Queen Victoria, who ruled Britain for more than sixty years.

Victoria was the one who was born at Kensington Palace, but for many people, the Palace is synonymous with Princess Diana. The statue is a remembrance of the love for her home, and it marks the love that Diana had for this place. It will now be permanently honored with this statue.

The statue features her with Prince William and Harry. It marks the unconditional love she had for them, and even though she is gone, the love can still be felt by the brothers. That is a legacy no one will ever forget.

That was everything you needed to know about the unveiling of the statue of Princess Diana. Even though she is gone a long time, she still continues to capture everyone’s hearts. Such personalities are always remembered, never forgotten, which is what the statue in Kensington Palace aims to do for the Dukes.