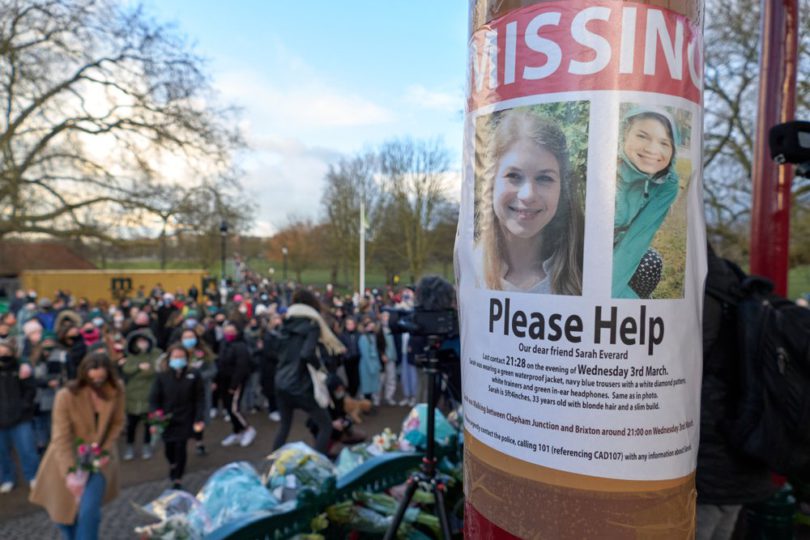 The news of the murder of Sarah Everard by police officer Wayne Cousins rocked not only Britain but the entire world. Not only because someone who is supposed to protect others is accused of murder. What happened makes us wonder repeatedly: can women feel safe anywhere?

Sarah Everard went missing in London’s Clapham borough on March 3 while returning home from a friend’s house. She was last seen alive in 21.30. Sarah was searched for a week and her remains were eventually found in Ashford Forest in Kent. Police officer Wayne Cousins ​​was detained on suspicion of the kidnapping and murder of Sarah.

On Saturday, March 13, there were events planned to honor the memory of Sarah Everard and draw attention to women’s safety. However, authorities have banned peaceful demonstrations, justifying the ban with coronavirus restrictions. But several hundred people came to the rally in Clapham. They carried posters: “Who will be next?”, “Don’t protect your daughters, but raise your sons,” “Stop the war against women,” “Men, your silence makes you complicit”.

As a result, the peaceful action ended with the dispersal of the demonstration and the detention of the protesters. And the authorities again justified the arbitrariness of the police with the coronavirus: they say that it is impossible to keep a distance in the crowd and the danger of infection is great.

The behavior of the police triggered a wave of protests across the country. Over the weekend, thousands of protesters gathered in Parliament Square and New Scotland Yard in London. They demanded to punish responsible ones.

London Mayor Sadiq Khan expressed solidarity with the protesters, saying that he was not satisfied with the excuses of the head of the city police. And he called this behavior “completely unacceptable.”

The incident caused a great stir on the network. Women activists wrote on Twitter: “They will not intimidate us. Don’t even think about touching us today.” There were also such messages: “The police do not protect us, we protect ourselves”, “Every woman survived the attack or knows at least one victim.”

Sarah’s death deeply shocked not only Britain but the entire world. Girls and women shared stories of violence on social networks. Kate Middleton even brought a bouquet to the spontaneously appeared memorial to the murdered woman. She commented on her visit: “Me, like any woman, remember what it was like to walk through London at night.” The protesters are uniting under the slogan #reclaimthestreets, or “take back these streets.”

During the investigation, the police asked the women not to walk around the city alone. Jenny Jones, a member of the House of Lords of Great Britain, in response to this proposed a curfew for men, forbidding them to leave the house after 18.00.

It is bitter to admit, but many already think that this is the only way women can feel safe. Do not clench the keys in your fist, do not hold your finger on the panic button of the phone. Do not turn around when entering the entrance …

The Independent asked experts from the Violence Against Women community. Here is what experts answered on this matter: